The Edward L. Anderson Jr. Award honors individuals who have helped translate scientific knowledge into practical training procedures, develop innovative new training methods and techniques, and educate others about the science of behavior and its application to animal training.

In February 2019 at our 11th annual Art and Science of Animal Training Conference, we honored Kay Laurence as the fourth recipient of the Anderson Award.

Kay has been an innovator in the world of animal training. She is always pushing ahead and giving us new ideas about training. At the beginning of our award ceremony, Dr. Jesús Rosales-Ruiz described how he met Kay some fifteen years before and explained in detail why we chose Kay as this year’s award recipient.

The reasons why we honored Kay Laurence are many. Here are just a few of them:

Her philosophy is for the dogs. Anyone who has worked with Kay Laurence knows that her primary focus is on the dog’s quality of the life and on building humane, considerate human-animal interactions. Her training decisions are based upon whether something is for the benefit of the dog or whether it will be costly for the dog. As Kay has told us many times, “Just because you CAN train a behavior doesn’t mean that you SHOULD train it.”

Her creativity has given us new ways to train. Kay Laurence has developed many new methods and techniques for training with positive reinforcement. Dr. Jesús Rosales-Ruiz touched on a few of the innovations that Kay has given us, from training strategies such as microshaping to training tools such as target sticks with measuring cups on the end for easy treat delivery! Kay was also the first to develop a tabletop shaping game (GENABACAB), which has inspired many other tabletop games, including PORTL.

Her ideals have helped build community. You may not know it, but our very first Art and Science of Animal Training Conference was Kay Laurence’s idea. Kay met our core speakers, Alexandra Kurland, Steve and Jen White, Ken Ramirez, and Dr. Jesús Rosales-Ruiz, through the early ClickerExpo conferences. They all quickly realized that their reinforcers were getting to spend time together, sharing ideas and talking about training. We created the annual Art and Science of Animal Training Conference as a way to provide more opportunities for animal trainers and behavior analysts to collaborate and support each other.

After Dr. Jesús Rosales-Ruiz’s introduction, Kay gave a short speech. She discussed some of the things that have influenced her and helped to make her the trainer who she is today. Here are just a few of the thoughts that she shared with us.

Listen to your dogs. In the 1970s when Kay Laurence first became interested in dog training, she didn’t have a mentor to teach her about positive reinforcement. Instead, she learned from her dogs. At first, she worked in the aviation industry and breeding, training, and showing dogs were her hobbies. She learned to watch her dogs and to listen to what they were telling her. Kay said that they shaped her behavior and taught her how to effectively use positive reinforcement. When she finally read Karen Pryor’s book Don’t Shoot the Dog in the early 1990s, it was a huge relief for her to realize that she wasn’t completely on her own. 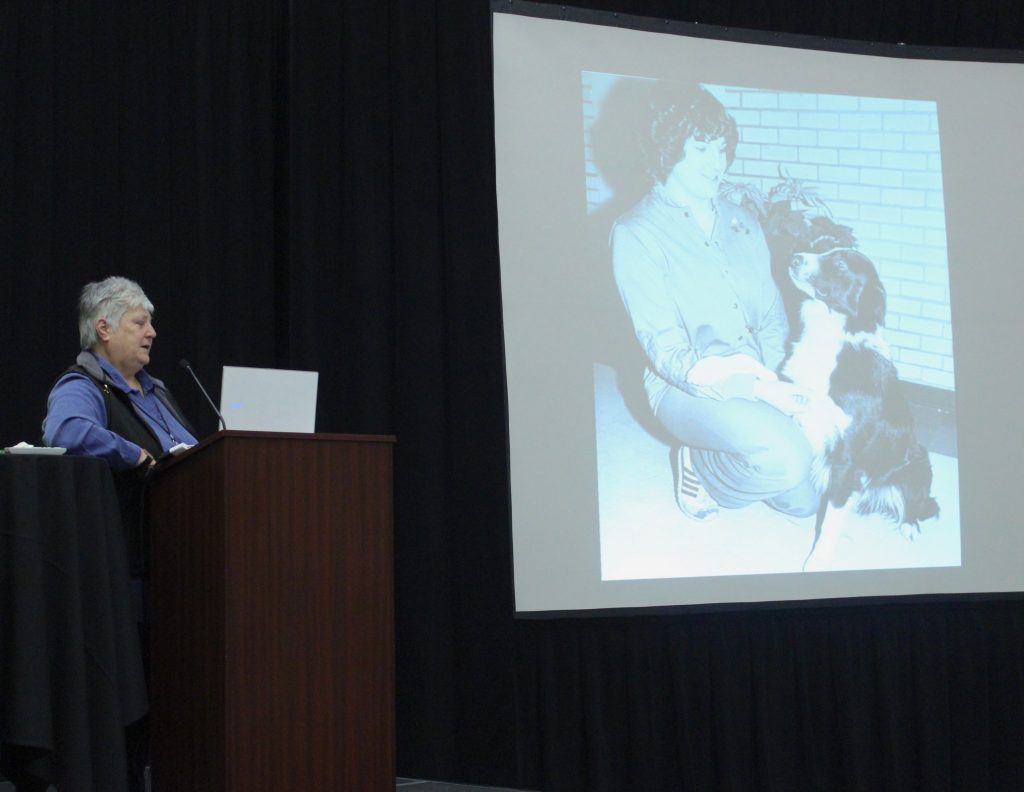 Be clear about your ethics. Kay Laurence said that each one of us needs to set our own personal standards and ethical framework. These have to be yours, not someone else’s. Part of Kay’s ethical framework is that everything she trains should be for the benefit of the dog. For example, there are some tricks and freestyle behaviors that Kay won’t train to her dogs. These behaviors may be entertaining, but they may not be good for the dog’s physical or emotional wellbeing.

Never fear asking a question. Kay Laurence said that her father inspired her to have a love of learning. When she would ask a question as a child, he would always take her seriously and help her find the answer. She told a story of spending one weekend with her father in the tool shed with prisms, lights, and wooden models as he answered her question, “Why is the sunset pink?” Woven throughout Kay’s talk was the idea that we should not be afraid of asking questions and of wanting to learn more.

Near the end of her talk, Kay Laurence suggested that we should each take the things we do and question is this really the only way, or could we do even better? Kay has been an innovator in the field of animal training, in part because of her attitude of continual improvement. We are thankful for Kay for all that she has done to help us make our training better and better.

One thought on “Kay Laurence receives the 2019 Anderson Award”

Subscribe for updates about our annual conference and other activities.